America’s Woes From the Outside In 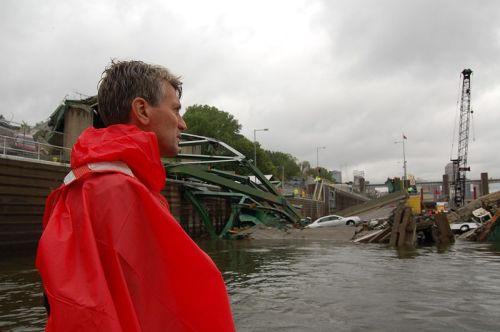 Two people following the US elections especially closely are Lionel Shriver and Edward Luce. Both are writers.

Shriver is an American who lives in London. Luce is a Brit who lives in Washington DC. Both have one foot in and one foot out of America. They are each insiders and outsiders.

Lionel Shriver is author of We Need To Talk About Kevin and ten other novels. She has lived much of her life outside the United States—in Kenya, Thailand, and now, Britain.

Her annual trips home to New York have become a way of measuring America’s decline. When she drives the Brooklyn-Queens Expressway, she sees what was once a serviceable highway now “completely rusted out.” The repairs “look as if they’re made with plywood.”

“You see this all over the United States,” says Shriver. “For visitors it’s quite a shock. Since I only go back every summer, I see this in juddering increments.”

Over time, Shriver has come to a stark conclusion about her homeland: “The United States is failing—and failing big time.”

There’s plenty of evidence to support that. The Pentagon recently commissioned a report on the nation’s defense-industrial preparedness—essentially, a compendium of the companies manufacturing key materials for the military.

Of the nineteen most critical industries servicing the US military, American companies led in all categories in the early 1990s. It now leads in just four of those categories.

That damning statistic was cited by Edward Luce, a Washington-based columnist with Financial Times, in his book called Time To Start Thinking: America and the Specter of Decline. (The US version subs the softer Descent for Decline.)

Luce spent time at the National Defence University, quizzing the kind of military people who he believes will be running the Pentagon a decade from now. He describes them as “panicked” about the disappearance of America’s manufacturing strength.

“They completely depart from Republican Party orthodoxy by saying that the first thing we must do is withdraw from the world,” says Luce. These officer-scholars believe that military strength “is based on economic strength.”

And so they have concluded that the Pentagon needs to slash its budget, freeing up public money for the domestic economy—primarily, education and infrastructure.

That may or may not be a solution. But will it see the light of day in the current political climate? Could such fundamental rethinking be adopted in today’s Washington? Luce doesn’t think so—and nor does Lionel Shriver. They think the country is too polarized.

For someone like Shriver who lives abroad, the gradual tribalization of political America into red and blue appears anything but gradual. It seems not just sudden but difficult to reverse.

Shriver recalls going to a party outside New York on one her recent trips back from Britain.

“Everyone agreed with everyone,” says Shriver.

“I had a conversation or two in which I indicated that I supported the Conservative Party in the UK, that was of course the wrong word.”

She says that made her a pariah. She calls this new-found tribalism, “political apartheid.”

“If you go to a party in the New York area you know that they’re all going to be Democrats. And if you open your mouth and say something that seems faintly Republican or even mildly pleasant about the other side, you’ll shock everyone,” says Shriver. “They will physically pull away from you.”

Writ large, that isn’t a great recipe for solving the country’s problems.

There’s plenty of despair in Shriver’s words—Luce’s too. It may be that they are chroniclers of America’s decline. But they are also passionate chroniclers, who believe that the country can yet learn from its missteps.