In every word, a microhistory

14-year-old Anamika Veeramani won 83rd National Spelling Bee on June 4 by correctly spelling the word stromuhr. It’s one of many English words in the contest that sounded decidedly unEnglish. Other words from this year’s contest: barukhzy (from a Pashto word that went through Russian before becoming English) , tanha (from a Sanskrit-derived Pali word), izar (originally Arabic, then went through Hindi before becoming English) and uitlander (from Afrikaans, which formed it from two Dutch words, plus a Latin-derived combining form).

These are all English words…yes, English words, even if they’re spelled according the rules and pronunciation of other languages. There are many reasons for this mongrelization of English spelling, and that’s where David Wolman comes in. 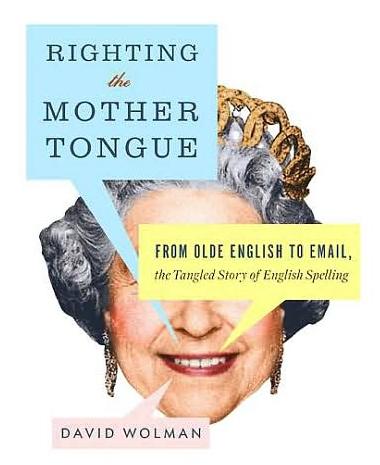 His book  Righting the Mother Tongue traces the anarchic evolution of English spelling. Unlike some languages, English is barely policed: foreign words — often with their foreign spelling intact — migrate unhindered into English. From time to time, people try to impose order, to simplify or regulate the spelling. Even President Theodore Roosevelt tried (and humiliated himself in failing).

The reason for contact between English and all those languages in the first place is colonialism, first British, then American. American colonialism has been as much cultural as political, which has only encouraged the English language to colonize smaller languages.  But the great openness of English is key too:  foreign words, with all those loopy spellings, will thrive in English’s  marketplace of linguistic ideas, if they are descriptive and original enough. Wolman told me he thinks of English spelling as jazzy: rootsy yet improvised, rule-bending, dangerous and inventive. Most kids don’t like jazz any more than they do spelling.

Finally, we remember John Shepherd-Barron, the man who invented the ATM. He died recently, which gave The World’s Alex Gallafent an excuse to point out that you shouldn’t really say ATM machine or PIN number.