The language of the beautiful game

At the World Cup in South Africa, it’s not just Brazil vs Spain and Argentina vs Everybody Else. It’s Bafana Bafana vs Les Éléphants, soccer vs football, cleats vs boots and the coach vs the gaffer.

We kick off with a story on the new adidas ball and its globally correct corporate name:  Jabulani, which means celebrate in the isiZulu language. There is, famously, a new ball for every World Cup.  Each time, the new ball is presented — and heavily marketed — as a engineering masterpiece and an advance on the last one. Maybe: the new  certainly moves through the air faster than its predecessors (which include the horrifyingly management-speak name, the Teamgeist from 2006 ). On the Jabulani, there are eleven lines and eleven colors, representing South Africa’s eleven official langages. Those linguistically-inspired lines create slight ridges on the ball, which are  controversial. Many World Cup goalkeepers think the ridges will cause the ball to swerve in the air, making it more difficult for the goalies to position themselves for saves. Of course, if that’s the case, most people — apart from goalies — will be happy: more goals, more TV viewers, more money. Fancy that: linguistic diversity acting as a fig leaf for commercialism. And just think if South Africa had 111 official languages…

There are thousands of websites and blogs to choose between for  following the World Cup and the cultural hoopla surrounding it. For stuff you won’t see anywhere else I recommend Davy Lane’s one-man South African show.  It’s full of smart, funny, non-touristy, interviews with locals. Davy also sports a not-so-mild obsession with Uruguay and its colors. Also, check out my colleague Jeb Sharp’s latest podcast on soccer and French colonialism. 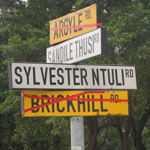 Next in the podcast, a story on the race to rename streets in South African cities. The old names — usually in Afrikaans or English — are often associated with the apartheid era. As noted in previous podcast/blog posts here and here, naming and renaming places is a way of  shaping history, of controlling how it is told.

Next, we focus on a few words rooted in South Africa’s eleven official languages that may go global after this tournament. One already has: vuvuzela, even if most non-South Africans aren’t crazy about the sound this plastic horn makes.  One other word from the African continent that’s gone global, at least in the francophone world: Drogbacité. This means a spirit of reconciliation and humility, named after Ivory Coast superstar –and Africa’s finest player Didier Drogba.

Three years ago, Drogba used his celebratory status to help jump-start peace talks between warring factions in Ivory Coast. Quite how central a role Drogba played is up for discussion, but suffice to say, the expression Drogbacité stuck.

Finally, a meditation on a US-English confrontation off the soccer field (or football pitch: take your pick). It is the linguistic battle over soccer/football terminology. It speaks to the nature of the often awkward, not-so-special relationship between England and the United States. England is represented here by New York-based writer Luke Dempsey; the US by broadcaster and former national team goalkeeper Shep Messing. 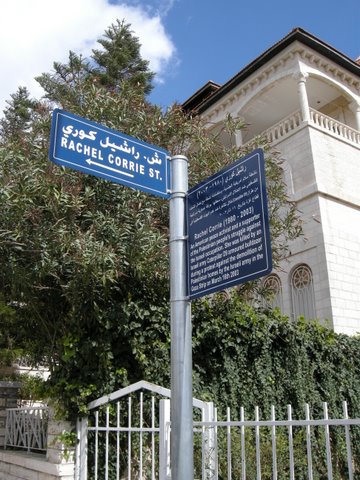 hen it comes to naming a street, you can go with the bland: Bella Vista Ave. Or not: Mugabe St (which has been among several contentious new street names under consideration in Durban, South Africa.)  In the Palestinian city of Ramallah, some recently named streets celebrate “fallen matyrs”, including American activist Rachel Corrie, who died in Gaza in 2003 in disputed circumstances. Israel too, memorializes  its “freedom fighters” from the early 20th century.

You might expect arguments over street names in Israel/the occupied territories and South Africa: these are places with profoundly traumatic recent histories.  But wherever there are streets — or other things to name —  there are heated debates over what to call them.  Why, some ask, name a new federal government building after Ronald Reagan, a small-government president whose administration tried to prevent such statist expansionism?

Also in this podcast, a conversation with Bob Creson, President and CEO of what appears to be the world’s largest Bible translation organization, Wycliffe Bible Translators USA.  According to Wycliffe, about two hundred million people lack access to the Bible in their native tongue. So, with the help of technology and donations, Wycliffe has set itself a deadline: it aims to have at least started translating the Bible into every language by 2025. Nearly all the languages that Wycliffe is currently working on are oral languages only: Wycliffe’s field translators must first design a writing system for any of these languages before committing a translation to paper.  So in those cases, the Bible will likely be the first book to appear in that language, and that culture.  The act of introducing the written word and an outside religion to a group of people who hitherto knew neither is, depending on how you look at it,  freighted with promise or fraught with peril. More on this in future podcasts.

Wycliffe, by the way, is named after 14th century theologian John Wycliffe, who translated parts of the Bible from Latin into Middle English.